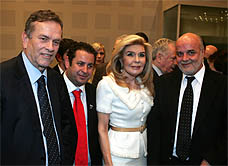 Ioannidis Ioannis (Minister of Culture the subjects of Sports), Riggas Andreas (Member OC), Vardigiogianni Marianna (President OC), and Gargalis Konstantinos (Member OC)
In the presence of the Deputy Minister of Culture, with responsibilities for Sport, Mr. Giannis Ioannidis, the Secretary General of Sport, Mr. Stavros Douvis and under the presidency of Mrs. Marianna Vardinogianni, the 1st Meeting of the Organising Committee of the 22nd Summer Deaflympics - Athens 2013 was held, on April 8, 2009 in the Zappeion Hall (Zappeion Megaron).

In order to present its objectives in regards to the conduct of the 22nd Summer Deaflympics - Athens 2013 Games, as well as to make it known to the public, the Organising Committee also invited guests from various sectors, such as politics, the Hellenic Olympic Committee, sport federations, journalists, executives of the business world, academicians and others.

The addresses of the Deputy Minister of Culture, Mr. Giannis Ioannidis, the president of the Organising Committee, Mrs. Marianna Vardinogianni and the Secretary General of Sport, Mr. Stavros Douvis followed, as well as a short video regarding athletes and games of the deaf. After that, the Organising Committee gave a reception for all participants and guests.

Following the reception, the Organising Committee of the 22nd Summer Deaflympics - Athens 2013, proceeded to their first official meeting.