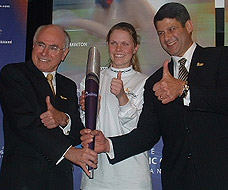 A proud display of the 20th Summer Deaflympics Torch! 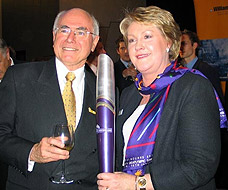 The torch relay and the lighting of the Cauldron will be one of the highlights of the Deaflympic Games. It will be the first time ever we will have a formal Torch Relay, however the flame will not be travelling around the world like in the Olympics since it will cost tens of millions of dollars. The Torch relay will be run locally in Melbourne, however, we can assure you that the Melbourne Organizing Committee has made plans to ensure that it will not be less significant or meaningful.

They are working hard to create an outstanding plan to make it an important event and will select athletes from each of our participating countries to be involved in the run as well as high profile group of people and Deaflympian athlete to light the torch.

More detailed information will be shared on how the torch relay will be organized as plans become finalized but we can assure you it is going to be a very exciting event that you do not want to miss!

On July 14th 2004, at the Federation Square in Australia there was a celebration to launch the first ever Deaflympic Games torch! It was a wonderful event attended by many Deaf leaders, Deaflympic Games supporters, ambassadors, athletes, Board and staff.

The Premier of Victoria and Prime Minister of Australia, Mr. John Howard attended this special event. This historical event had received tremendous print and electronic media coverage. This strengthens the promotion of the 20th Summer Deaflympic Games!