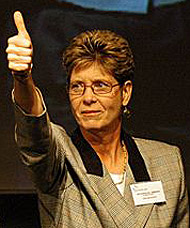 The countdown for the 2005 Deaflympic Games is now 330 days!

I still feel very upbeat from my recent site visit to Melbourne, Australia from 3 to 9 January.  The mission statement of the 2005 Organizing Committee (better known as M2005) is that they will stage a world class sporting and social event for Deaf and hard of hearing athletes and friends around the world.  Yes, they will, I can assure you!  You should really consider about attending the Games next year.  If you miss it, it will probably be one of the biggest regrets you will have.

M2005 has been working diligently in meeting the objectives in a timely manner. They have secured at least 87% funding with a $10 million Australian dollar budget. They also finalized mascots (Mel and Vic), logo, merchandise for sale and website in 8 languages! They held a a one year to go kickoff on 5 January at Crown Promenade Hotel which drew a lot of attention from local newspapers, radio and TV!  It is great for publicity and offers better awareness about DEAFLYMPICS.

However, there are some challenges that M2005 face daily, such as communicating with CISS nation members about hotel accommodations and Australia's strict policy for entry of foreign visitors.  As of 15 January 2004, only 16 countries have booked accommodations with Event and Travel Office (ETO).  We have nearly 90 countries!

For preliminary forms for both individual and team sports that were due to CISS office by 15 December, only a total of 34 countries submitted.  The office staff and I had to send a reminder to the rest of 90 countries and agreed to accept late submissions. Delay causes hardship on M2005 because they were very anxious to get the numbers for each sport in order to set up a practice and competition schedule.

I am pleased to announce that CISS and WIDEX have signed an agreement for continued financial support. On behalf of Deaf athletes, I send my heartfelt thanks and look forward to many more years of remarkable collaboration.

I also wish to congratulate Sergey Tichtchenko of Russia and Amanda Goyne of USA for being selected by the electors for the prestigious 2003 WIDEX Sportsman and Sportswoman of the Year. Both athletes performed exemplary by winning a total of 3 medals each at the 2003 Deaflympic Winter Games in Sundsvall.

With assistance from Legal Commission, CISS prepared Anti-Doping policy which will be in effect at the 2005 Deaflympic Games and subsequent games and world championships.  CISS By-laws are now ready for CISS Executive Committee to review and adopt at its next meeting in Lausanne in mid-May 2004.