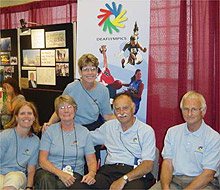 CISS Management Team at the WFD Congress Exhibition Booth along with Jill Lovett.

It has been a few months since I last wrote this Presidentâ€™s e-Message.  However, lot of water has flown under the bridge in these ensuing months!

Highlights of these months were:

A visit to beautiful Portschach where the Austrian Deaf Sports Association did a wonderful job in successfully organising the Deaf World Team Tennis Championships.  Congratulations should also be extended to the cup winners: Germany â€“ Dresse Cup and Great Britain â€“ Maere Cup.

One week after this event, the CISS Management Team had its meeting in Montreal, which was hosted by the Canadian Deaf Sports Association, and we would like to thank all Canadians who worked hard to make our stay in Montreal a comfortable and enjoyable one.

This was then followed by the CISSâ€™ presence at the General Assembly of the World Federation of the Deaf, and a week-long information booth during the WFD Congress. Most important activities during these events were not just attending the meetings, saying few words, sharing information, but the networking itself!  Especially during the WFD Congress we had hundreds of deaf leaders from every corners of the world, coming to our booth, wanting to know more about the CISS and the Deaflympic Games.

As mentioned in my last e-Message, Tiffany Granfors, our Administrator, has been successful in her application for post-graduate studies at the International Academy of Sports Science and Technology. Soon after the Montreal Congress, Tiffany was kept fully occupied with her move to Lausanne.

The costs involved for Tiffany undertaking these studies will be very high, however fortunately we have received donations from various individuals and organisations. If readers are interested to make a donation towards costs of Tiffanyâ€™s studies, please contact me at Lovett@ciss.org