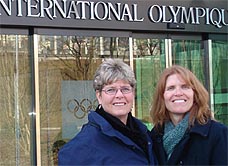 Donalda Ammons and Tiffany Granfors in front of IOC building 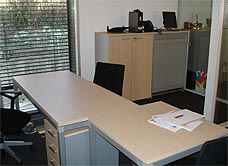 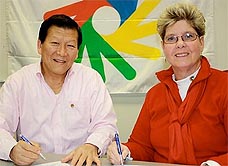 Despite a tumultuous end of 2008 for many of us around the world, it is critical for us to seek practical ways to make some necessary and constructive changes. With changes, we can move forward and become more resourceful than ever.

I am writing this while flying back home from an eight day fast-paced trip in Europe- Athens, Lausanne, Bratislava, and Munich. First, we had our first meeting with the 2013 Summer Deaflympics Organizing Committee in Athens, which is led by Mrs. Marianna Vardinoyannis. A Memorandum of Understanding was finally signed at a well-attended press conference. The city of Athens demonstrates a great deal of zeal and confidence about hosting the Games in 2013.

Then I had a personal meeting with IOC President Jacques Rogge at the IOC headquarters on 22 January. Ms. Tiffany Granfors, ICSD Chief Executive Officer and Mr. Christophe Dubi, IOC Sports Director were also in attendance. President Rogge re-affirmed his support for Deaflympics and Deaf Sports Reform by:

ICSD shall mark this day as a milestone in the ICSD history book.

While in Lausanne, we also met with the managers at the Maison Sport International (MSI) to discuss the feasibility of finding a suitable office space at the MSI premise. Much to our pleasure, they now have an office for us to occupy by March 2009. The City of Lausanne and the Canton of Vaud have formally admitted us as an international governing body with bona-fide status to relocate to Lausanne and provide a rent-free office space for the first 2 years. Our new legal address shall be Maison du Sport International, Avenue de Rhodanie 54, CH-1007 Lausanne, effective 1 March. The office will be managed by a local deaf Swiss. In due course a sports management and technology student intern from the University of Lausanne (AISTS) will perform assigned Games-related projects. The current office in USA will become a satellite office and will remain an integral part of the organization for three branches.

Another productive meeting took place in Bratislava with a group of key individuals who consented to assume the responsibility for the 2011 Winter Deaflympics in High Tatras. After careful assessment of the current political and financial situation in Slovakia, it was mutually agreed that there shall be a new and separate organizing committee, whose responsibility shall be only for the Games. By 15 March, the Slovaks must provide evidence of financial support for the Games. Furthermore, the spirit and determination by the hard-working Slovaks are admirable.

The ICSD Management Team met for 2 full days in Munich to address some important matters relating to future directions for Deaflympics and Deaf Sports Reform, per IOC's requirements and expectations.

On 29 January, ICSD and Viable, a deaf-owned and deaf-operated provider of video relay services (VRS) proudly announce an agreement to bring seamless communications experiences to the deaf and hard of hearing community at the Deaflympics and all other international sports events sanctioned by CISS. Viable was selected because both CISS and Viable share common values. Viable proudly exhibits a "can-do" attitude; shows diversity throughout its products, services and employees; and never offers second-best -- they will provide only the very best or nothing." For more information, read a press release in Viable website.

2009 will be an exciting year for ICSD, with total resolve to display a new source of energy and adopt positive changes. Forward and Upward!