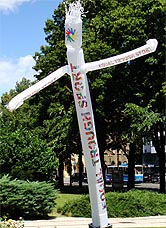 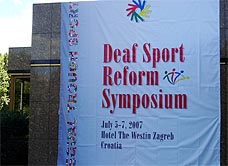 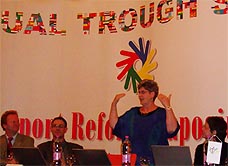 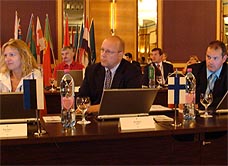 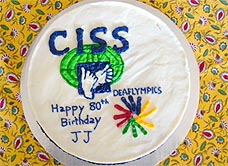 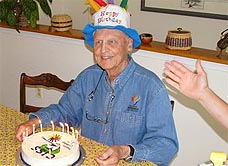 Jerald Jordan all smiles
Since my last report, I am pleased to say that the past few months have been full of excitement and amazement.

One of the highlights during my travel was hosting the Deaf Sports Reform symposium in Zagreb, Croatia. A total of 40 countries sent representatives to the symposium, where they were convened as a whole to discuss the concept of a reform for deaf sports worldwide.  The objective of the symposium was to encourage public discussion among the ICSD members about the future directions of deaf sports. I was very pleased to see positive support for reform changes which will take us to a newer and higher level of standards and performance. The Deaf Sports Reform (DSR) ad-hoc commission took notes of ideas and suggestions presented by the symposium attendees during the symposium. For the power point presentation of DSR Conceptual Plan, click here

The DSR ad-hoc commission will meet again in Vienna, Austria during the weekend of 19-21 October to prepare a formal report with recommendations and submit it to the Executive Committee of ICSD for further deliberations and implementation in phases.

The delegates at the Congress in 2009 Taipei will take a vote to approve changes and implementations based on the recommendations from the DSR symposium in Zagreb.

Also on 7 July, our dear Jerald Jordan celebrated his 80th birthday with a bang! We surprised him with a video clip taken by Wayne Langbein during the Deaf Sports Reform symposium where everyone could gesture "happy birthday" in international signs. Prior to my departure from USA, I along with the ICSD staff prepared a birthday luncheon at JJ’s home.

With the change in bidding procedures approved during the Congress in Salt Lake City, I took advantage by meeting and discussing with city and government officials in Barcelona and Dubai to gauge their interest in hosting the 2017 and 2021 Summer Deaflympics respectively.  I am pleased to confirm that both cities have expressed genuine interest and intent to prepare a formal bid with the ICSD to host the Games. For more information about Barcelona visit http://www.barcelona-tourist-guide.com/en/albums-en/olympic-stadium/pages/olympic-stadium-01_jpg.html and http://www.inefc.net. For Dubai, go to http://www.dubaisportscity.ae

On behalf of ICSD, I must extend my deep gratitude to Mr. Helder Duarte, Secretary General of European Deaf Sports Organization, for his excellent assistance and support towards the 2009 Taipei Organizing Committee by sharing the EDSO exhibition space with the T2009 group during the World Federation of the Deaf Congress in Madrid. Thanks, Helder!

For the first time for a world championship event, Gallaudet provided us with two Gallaudet student interns who contributed a lot with writing feature stories during the Dresse and Maere Tennis World Cup.  The student interns were Renca Dunn of Arizona and Blair Rasmus of California.  Enjoy their stories - go to http://www.dresse-maere-cup2007.de/english/indexeng.html and click on coverages and then reports.

In this edition of E-News, you will find more information on the competition results of our world championships in basketball and swimming, plus regional championships. Many new records were set.  Congratulations!  We are definitely ascending to a new height!