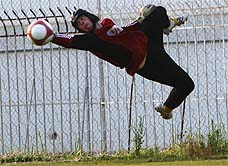 Christian Currie of Australia makes an acrobatic save

In two months time, on 5 September, comes the 365-day countdown to the Taipei 2009 Summer Deaflympics. The Organizing Committee (hereafter “TDOC”) takes pleasure to commemorate the milestone moment and share experiences in the spirit of international community with friends from around the world.

The most remarkable among all countdown celebrations is the Invitational Games for the Deaf. On the evening of 5 September, 337 hard of hearing and deaf sports friends, including athletes, coaches and team staff, will be in Taipei with us to officially announce the 365 days to the Summer Deaflympics in 2009. An adorable show presented by young performers of Children’s Hearing Foundation and Taipei School of Hearing Impaired will kick off this sports fiesta at the opening ceremony. The 6-day event includes 5 competitions: football, table tennis, judo, karate and taekwondo; with 260 athletes are from Argentina, China, France, Greece, Hong Kong, Iran, Japan, Korea, Malaysia, Russia, Saudi Arabia, Thailand, Turkey, and Uzbekistan.

As excited about the Invitational Games as TDOC are the students of 16 senior high schools. Student ambassador teams have been organized in these selected schools and assigned to each participating national teams. They will be cheering with athletes from the opening ceremony through every game. To prepare these young people to be the best "ambassadors", the seed college volunteers of sign language of the Taipei Municipal University of Education started a sign language learning program in May at these high schools. In addition, 16 teachers will be appointed to serve as the attaches to national teams during the Invitational Games. They will be trained to accommodate individual needs, respond to emergencies, and exchange messages between TDOC and the teams. We hope the practice will succeed, for its purpose and the experience will lead us to host the most thoughtful Deaflympics in 2009.

Another public countdown celebration is the basketball match between the Chinese Taipei Deaflympics basketball team with the Taiwan Beer Team in October. Taiwan Beer Team is the two time champion (2007 & 2008) of the Super Basketball League in Taiwan. The supporting fans of Taiwan Beer Team alone would draw tremendous public interest and attention. When it is further sauced up with the fun that the game will be adopting deaf basketball rules, the event is predicted to be one of sports spotlights for the media.

TDOC's devotion for Deaflympics has no boundaries. We do not hesitate to reach beyond sports. Art Director Stan Lai is planning a promotional film telling life stories of hard of hearing and deaf of all fields, such as athletes, artists, and pop-art celebrities, etc. The film will give a close look into their every day lives, reveal the hardship they face, the determination they have, and the support they receive from families, friends, and society. In addition to raising deaf awareness of the public, we expect to demonstrate the immense power within the silent minds through their persistence and struggles; and furthermore, aspire those who wrestle with life and plant hope in those who in despair.

It is well understood that communication is vital to the success at the sports games for the hard of hearing and deaf. TDOC continues to strengthen the services of international sign interpretation at the 2009 Deaflympics. Ms. Susan EMERSON, an Australian sign language interpreter, was invited to share her expertise on 7-18 April. 17 TDOC staff and 23 volunteers attended the sign language classes. Excitingly, her visit attracted media attention. The Public Television Services and other 8 major TV channels interviewed Ms. EMERSON and came to film the classes. It effectively raised national deaf awareness and promoted Deaflympics. This was followed by Mr. Paul HEUSTON's visit on 28 June - 4 July. Mr. Heuston is a sign language professional from Australia and has worked on many interpreting assignment. He served as the interpreter to the former President of ICSD from 1999 to 2003. Mr. HEUSTON’s class is meant to bring the international sign service of Taipei Deaflympics to a more advanced level; and, the students at the classroom are expected to become capable of teaching basic international signs to volunteers and staff. Therefore, instead of open registration, 15 attending volunteers and staff are selected from the group who has received Ms. EMERSON’s instruction and passed the evaluation test.

Besides the ongoing tasks, TDOC currently has a priority mission -- ICSD's visit in October. President AMMONS and Executive Director GRANFORS will be arriving in Taipei on 4 October with a group of Executive Committee members and Technical Directors. They will spend a week with TDOC to conduct venue inspection and discuss the progress of 2009 Deaflympics. TDOC is committed to delivering a detailed report on every aspect.

The status of the venues is no doubt one of the most important purposes of ICSD's October trip. In order to have most of the venues ready for inspection, final site visit will be conducted at the first half of July before the contractors begin the construction, renovation and recondition. Every venue will be physically re-examined to ensure floor layout and facility allocation meet requirements. We hope the venues presented to ICSD in October will be close to perfection.

The TDOC look forward to the 365 countdown moment coming up in September and is fully geared up to host the Invitational Games for the Deaf. On the evening of 5 September, we will proudly announce to our hard of hearing and deaf sports friends that "Yes, We Are Ready!"