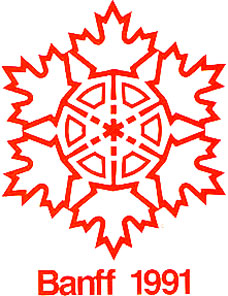 The 12th World Winter Games for the Deaf was hosted in Banff, for the first time in Canada's history.

The Canadian Organizing Committee was fortunate to have the world famous Banff Springs Hotel as the official headquarters. It was founded in 1888, a legendary 841 room "castle" in the heart of the world's most scenic Canadian Rockies.

All events took place in Banff/Canmore area, except for Speed Skating which took place in the Calgary Olympic Oval, about 120km east from Banff. Downhill and super-G alpine skiing events took place at Sunshine skiing resort. Giant slalom and slalom were held at Mount Norquay skiing resort. Cross country skiing events were held at the Olympic tracks at Canmore Nordic Center. Ice hockey was played at the Canmore Stadium.

The Canadians demonstrated the sport of Curling.

Ice Hockey has been recognized as a new winter discipline in the Deaflympic sports competition.