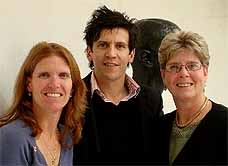 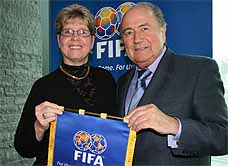 Donalda Ammons and Joseph "Sepp" Blatter
It is hard to believe it is time again to send season’s greetings. I will say the year of 2007 has been very good. We have definitely made some positive steps in strengthening and increasing programs and services for deaf athletes worldwide.

I would like to reiterate what I wrote in my President’s message for the April 2007 E-News.  I am truly committed to fulfilling the objectives of our organization, where we seek ways to develop more sport opportunities and provide direct support for our members and athletes. Let me give some examples here:

Early in 2007, we witnessed the adoption of Article 30.5 of United Nations Treaty on the Rights of Persons with Disabilities, which is a major breakthrough. It will go a long way in expanding deaf and hard of hearing athletes’ abilities and protecting their rights to play and compete on an equal playing field. Even better, the adoption of this specific article - 30.5 will ensure more and significant level of respect and recognition that is due for deaf and hard of hearing athletes who want to compete in the Deaflympics.

In Salt Lake City, Utah- the site of the 2007 Winter Deaflympics where we witnessed a new record in the total number of countries and athletes participating.  For the first time since 1975, due to successful marketing strategies utilized during the Games the SLC Organizing Committee reported a net profit of approximately USD $100.000.  Primary beneficiaries of the profit will be our young athletes.

In early spring, I started community-based fundraising by writing to many people in my home country to help ICSD to strengthen and expand Deaflympics’ place in the world of sports.  I am pleased to report that sizeable donations continue to arrive in the mail. It is never too late to send your donation - Send to:

Last July representatives from more than 40 countries traveled to Zagreb, Croatia to take part in the Deaf Sport Reform symposium. They showed a strong support for reform in Deaf Sports because it was the right thing to do. We are committed to upholding to the Olympic Spirit and its values by embracing changes.

In November to promote advancement of female leaders, we organized the first Deaf Women in Sports seminar in Switzerland, with representatives from 13 European countries in attendance.

Our membership base is growing at a steady pace and we are reaching the 100+ benchmark. This means more new young Deaf athletes will have opportunities to receive training and competing in our sanctioned events.

Last month in Lausanne, I had a great opportunity to meet with Mr. Christophe Dubi, IOC’s new Sports Director who assumed the role in July, replacing Mr. Kelly Fairweather who has accepted a new job at a university in his home country- South Africa.  At our meeting, Mr. Dubi and I agreed that we must work together to seek constructive ways to ensure that our deaf athletes will be afforded with equal opportunities for training and competition.  Each one of us must commit ourselves to a greater height in preserving the privileges and benefits of worldwide deaf sports and Deaflympics.

While in Switzerland, I also had a very welcoming meeting with Mr. Joseph “Sepp” Blatter, President of FIFA at the FIFA headquarters in Zurich. Among many different matters discussed at the meeting, I sought cooperation with FIFA for certification for deaf football referees and coaches, in-kind donations for clothing and equipment to benefit our members and different levels of training for both genders and youth. In addition, I extended an invitation to Mr. Blatter to come and observe our inaugural football championship in Greece this coming July.  Since FIFA’s mission is to reach out and touch the world, using football as the symbol for hope and integration, Mr. Blatter showed his commitment to supporting deaf football players through FIFA’s social responsibility division.  I have asked Mr. Christof Niklaus, ICSD Technical Director - Football and Mr. Josef Willmerdinger, ICSD Sports Director to collaborate with FIFA.

Here comes 2008!  We will have a very busy calendar with more than 15 international competitions on our calendar ranging from regional championships to world championships.  Moreover, we will witness the inauguration of the 1st Mediterranean Sea Games in Izmir, Turkey. We are pleased to finally host the 1st World Deaf Football Championships in Greece, after several years of resolving the team selection procedures.

I can guarantee you another exciting and dynamic year! Come and support our athletes!