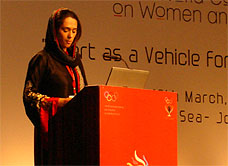 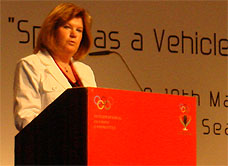 Ms. Gunilla Lindberg, Vice President, IOC
Tempus fugit! It is hard to believe it is time again to change clocks.  On the second Sunday in March, I must turn the clock forward in observance of daylight saving time (DST), so that the sun will rise and set later in the day.  This system piqued my curiosity to learn more about the benefits of turning the clock backward and forward.  To my surprise, there are only 1 billion people in 70 countries in the world utilizing this system.  I see it as a great benefit for energy conservation.  At this time of the year with daylight saving time, we see more sporting activities are held outdoors, thus it saves energy.  I get much pleasure watching athletes practice on the field until dusk because Sue Castle, executive producer of PBS Sports wrote that participating in sports has the power to combat everything from racism to low self-image.  This also applies to our deaf athletes who must remember to uphold to the ICSD motto - PER LUDOS AEQUALITAS (Equality through sports).

In early March, Tiffany Granfors, Executive Director, and I traveled to Dead Sea, Jordan to attend the 4th IOC World Conference on Women and Sport for 4 days.  The conference theme was “Sport as a Vehicle for Social Change” covering issues relating to gender-imbalance, development of gender-equity programs and IOC’s prominent role in setting a positive trend in enhancing women’s participation in sport. The IOC has clearly called for stringent measures that international sports organizations under the IOC structure must take to implement gender-equality and to ensure women’s participation in sports and leadership.

Speaking of equality, since our motto is PER LUDOS AEQUALITAS (Equality through sports), we shall practice it by creating a deliberate and comprehensive policy on gender-equality on the field of play for deaf female athletes.  In the near future, our members who wish to participate in the Deaflympics or world championships shall be required to bring men and women athletes, as well as sending a female delegate to the biennial Congress. At their next meeting in Taipei in October 2008, the Executive Committee will address various issues relating to equality and make formal proposals for ratification at the 2009 Taipei Congress.

Wednesday, 26 March was indeed a very gloomy day for the entire deaf sports world.  Jerald M. Jordan, (JJ) our former president (1971-1995) and honorary president, passed away at home after one year of a courageous battle against lung cancer. It was JJ's wish that there be no services. JJ would like that we share memories we have had with JJ and to remember him by doing something that we enjoyed together through his life. I personally promised JJ one week before his passing that we would always cherish the value the spirit of Deaflympics and adhering to the ideals of Olympics. A tribute with a slideshow can be viewed now on our website.