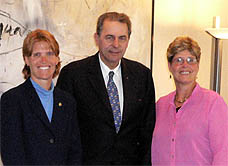 Due to current unrest situation at Gallaudet University, the place of my employment, I am regrettably unable to submit a lengthy report for this month.

Nevertheless, I wish to report that Ms. Tiffany Granfors, Executive Director and I had a rewarding and productive trip to Athens, Greece for the site visit of facilities for the 2013 Summer Deaflympics. The overview is that the city of Athens can be successful in hosting the 22nd Summer Deaflympics in 2103 with all the resources that are already available from the 2004 Olympics. The only major challenge is to secure substantial support from the Department of Sports of Greece.  The Hellenic Athletic Federation of the Deaf will make a formal bid presentation during the 40th Congress in Salt Lake City next February.

Immediately after Greece, I flew to Switzerland for a meeting with IOC President Jacques Rogge at the IOC headquarters in Lausanne. My visit with President Rogge was published in the Olympic news.  At that meeting, President Rogge promised to write a letter after consulting with the IOC Legal Affairs, to affirm that ICSD is the international governing body of deaf sports including Deaflympics.  He also clearly stated that ICSD as a recognized federation of IOC- for deaf sports, shall not be allowed to use the following:

It was then agreed that IOC and ICSD would soon create a Memorandum of Understanding (MOU), which is forthcoming in a couple of weeks. With Rogge’s letter and MOU, ICSD is committed to maintaining a harmonious relationship with IOC and National Olympic Committees and National Paralympic Committees. We anticipate mutual respect and cooperation.
See you soon in Salt Lake City!