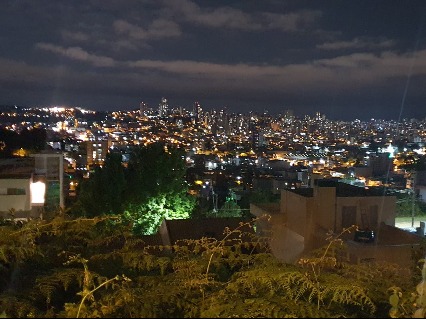 A large Deaflympics cauldron will be at the top of the hill. The flame, when lit, will be seen by over half of a million residents from below. 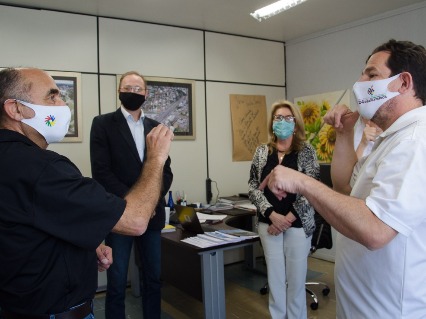 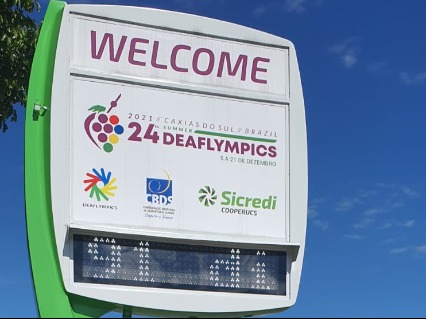 One of many countdown signs in Caxias do Sul.

As part of the preparations for 24th Summer Deaflympics (to be held on 1st to 15th May 2022), Martin Bogard, the Technical Commission (TC) Chairperson was in Caxias do Sul, Brazil for 8 days (October 14 - 21) to do an on-site inspection for all Technical Directors (TD). He also had several meetings planned with the Olympic Committee (OC).

Mr. Bogard visited all sports venues including the Deaflympics Square where there will be an information office, accreditation office, audiogram tests clinic, several marketings and many stools for food and drinks, etc.

There will be a bus station nearby for the buses to transport all athletes to all sports venues and hotels.

With each venue visit, Mr. Bogard has done the Live Video calls with all TDs. It gave each TD an opportunity to view the venue of the sport he/she is responsible to oversee. The relevant persons were also on the spot at the venues to answer several questions from the TDs.

The only exceptions were the Cycling/Mountain Bike and Orienteering sports since they were multi-venues. The OC will arrange for the 3 TDs, (Orienteering, Cycling Road/Mountain Bike and Football) to come to Caxias sometime in December to finalise their multi-sports venues.

Seven (7) sports that will be held at the University of Caxias.

The athletics stadium, the track and field will be upgraded to meet the required standard.

The shooting venue, the work has begun to carry out to build a brand new shooting range with the latest electronic system.

The OC provided Mr. Bogard a SIM card to enable him to use the mobile network to meet his communication needs during his stay in Caxias. All athletes and officials will receive their SIM cards too.

"This is great news!" Mr. Bogard exclaimed of this communication arrangement.

Mr. Bogard was very impressed with Caxias do Sul. He found it to be a beautiful hilly city full of friendly people. The rush hour traffic has proven to be very light. It did not impact him with his 8-day journey around the city.

"The average journey between the Deaflympics Square and sports venues is between 10 and 20 minutes," he remarked.

Mr. Bogard had the opportunity to met the Mayor and deputy Mayoress of Caxias at the City Hall. They showed their strong support for the Deaflympics in Caxias do Sul and have already worked closely with the OC. They will also work with the government. In all, the city is looking forward to welcoming all athletes and officials next May 2022.

Overall, Mr. Bogard has found the site visit and meetings with the OC and the Mayors to be very successful.

"I look forward to giving my full report at the [Extraordinary] Congress," he said. "See you all in Lausanne!"

Reported by Martin Bogard on 21 October 2021 in Caxias do Sul, Brazil.